Top 10 Essential Skills for Website Developers to Learn in 2022 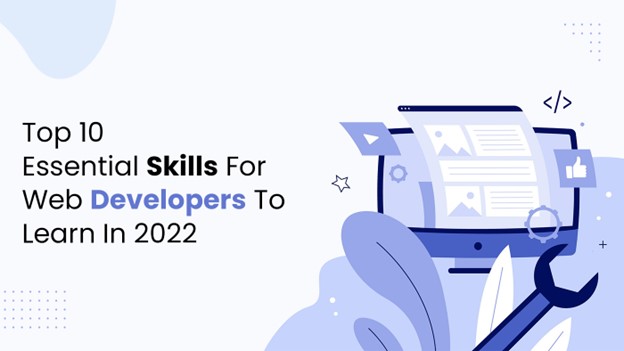 Table Of Contents
Here is the list of Top 10 Essential Skills for Web Developers to Learn in 2022:
Conclusion

If you are a web developer wondering what you should learn in 2022 to advance your skills, or if you want to become a web developer in 2022 but are unsure which technologies, tools, frameworks, languages, and libraries to learn, you have come to the right place.

Frontend action and backend result are the two general types of website development. The front end of a website is the part that interacts with users.

This article will cover some of the most important things a web developer should know.

Here is the list of Top 10 Essential Skills for Web Developers to Learn in 2022:

1. JavaScript maintains its position as the most popular programming language:

JavaScript’s popularity has remained consistent even decades after its invention. This universal language is still in high demand among recruiters and employers alike, and experienced JS developers can expect a high salary.

The DevSkiller IT skills report provides some interesting context for the situation. For the third year, JavaScript completed the list of developer candidates’ most sought-after IT skills. SQL, Java, HTML/CSS (which, combined, counts as a programming language), and.NET/C# rounded out the top five.

Even though other languages, particularly Java, have begun to catch up, it does not appear that JavaScript’s popularity will decline anytime soon. In many organizations, the language is still the default choice for new solutions. It also has strong community support and a wealth of learning materials and opportunities to hone one’s IT skills. JavaScript is still a good choice for those primarily concerned with their career’s long-term prospects.

Version control is the ability to track and control changes made to code, which is something that every Milwaukee web developer must be able to do. That is usually accomplished using software designed specifically for the purpose. While programmers have a few options, Git is the most widely used version control system.

Understanding how to use version control software such as Git is essential for Web Developers because it allows them to track and control code changes and makes it easier to fix mistakes. If a developer makes a few small changes that cause the website to stop working, they can revert to the last functional version of the code and work their way forward rather than combing through the code to find the mistake.

You must be willing to learn how to use libraries and frameworks to become a Milwaukee web developer. Though these two terms are frequently used interchangeably, they are not the same; a framework provides a set structure within which the developer must work, whereas reusable bits of code contained in a library offer greater flexibility, with the developer determining the architecture.

However, libraries and frameworks share one important feature: they are both used to simplify and accelerate development, making them a necessary skill for aspiring programmers.

Java was once very popular, but its popularity has recently waned. That trend is expected to reverse in 2022. Many recruiters and employers are currently looking for experienced Java developers. Java is particularly popular in corporate settings.

Previously, some saw Java as a language that remained mostly relevant due to the need to support legacy systems, but new solutions have recently entered the market.

This web developer skill should come naturally: it is more about general computer skills, such as knowing how to operate an operating system and complete simple tasks with little or no assistance. Using a web browser, printing a document, using an email account, and so on. The fundamentals of computer use and understanding the internet.

This Milwaukee web developer skill should include the ability to perform basic administrative tasks and be familiar with word processing and spreadsheets.

Soft circles is one of the best web design Milwaukee firms, working with clients to create category-defining websites. They are a truly exceptional web design firm known for its hands-on, partner-led approach. Their web designers favor modernist aesthetics, which they frequently employ in their work.

Their talented web developers and designers aid in the development of brands for a connected future. That implies they offer a diverse range of digital products, such as mobile apps, custom software development, and websites.

Big data is everywhere; it is difficult to find a sector or organization that isn’t influenced by data in some way. While understanding data analysis was once considered a bonus to your core IT skills, it is quickly becoming a requirement in some fields. Machine learning’s increasing prevalence has been a major driving force, with algorithms playing a critical role in how companies build and improve their products and services.

It is critical to keep track of the code. Sometimes you need to make changes, revert code, or track down the developer who worked on a specific code section. Such tracking is done using version control systems.

Working on the front end necessitates the use of a browser. The most popular web browser is Google Chrome. Because of its DevTools, it is very popular among frontend developers. These tools are extremely useful in various situations, most notably debugging.

As previously stated, debugging is an essential part of all types of development, so understanding Chrome DevTools is extremely beneficial when looking for bugs.

Coding tests are quickly becoming the preferred method of screening web developer candidates. This sentiment is reflected in coders preparing for coding challenges and interview questions for longer periods and taking them more seriously overall.

In response to this trend in candidate behavior, recruiters are now including more difficult programming tasks. As a result, candidates taking coding tests face higher expectations than ever before.

Understanding CSS is important, but it can be limited at times. When a project expands, CSS expands and becomes difficult to manage. CSS requires more time and effort, which can be avoided using CSS preprocessing.

Web development is a massive industry that spans many job roles and is extremely diverse in terms of what you can do as a Milwaukee web developer. It is simple to start: you can begin by learning basic web developer skills such as HTML and CSS design and then progress to learn more. You do not always need a degree or college credentials to get a job. Sometimes a strong online portfolio and relevant experience are all that are required. Many people worldwide change careers to become programmers and become very successful.

Let us know about your thoughts